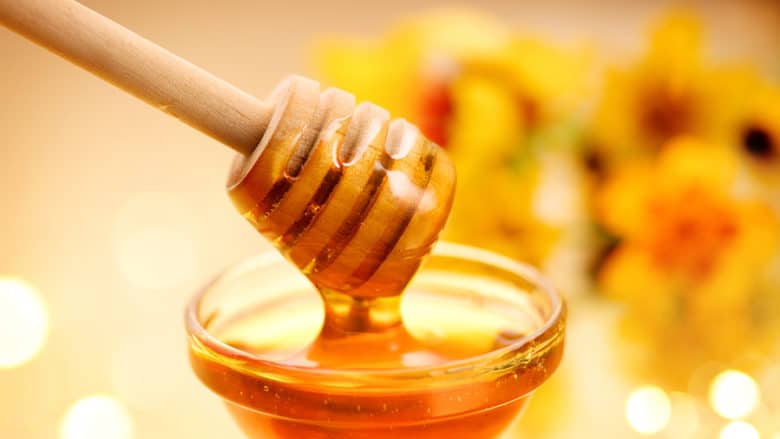 Honey benefits begin as the honey bees fly from flower to flower sipping sweet nectar while disseminating and collecting golden pollen with their hind legs.

They return to their hive and join with other honey bees in using their “honey stomachs” to ingest and regurgitate the nectar until it is transformed into honey.

After storing the honey in honeycomb cells, the bees fan their wings. The air currents they create evaporate just the right amount of water to raise sugar content and prevent fermentation, thus preserving the honey.

The bees and the plants create an energy rich food source with over 600 known properties, while they assure the continued flowering of the plants through cross pollination.

If it weren’t for the honey bee’s pollinating blossoms, 80 percent of plants would not go to full bloom.

Honey benefits result from this fascinating work and are specific to the flowers visited by the bees.

Honey consists mostly of sugars (carbohydrates) along with trace amounts of other nutrients. Although the nutrients vary depending on the type of honey, on average, one tablespoon provides 64 calories and the following nutrients measured in grams (g) ( Nutrient Database):

As a general rule, darker honey has more vitamins and minerals than lighter honey.

Honey counts as a moderately desirable sugar/sweetener source with a glycemic index of 55 and a glycemic load of 10.

Honey is a quick, easy, and natural source of energy. The carbohydrates in honey provide the energy for muscles to do their work, plus they help maintain muscle glycogen.

Glycogen acts as an energy reserve that can be drawn on when carbohydrates aren’t available in the blood stream.

Honey naturally attracts and retains moisture making it a great moisturizer. Look for it in moisturizing products including cleansers, creams, shampoos and conditioners.

You can also simply add a squeeze to your soap or moisturizer at home or whip up your own recipe like Cucumber Honey Eye Moisturizer.

A small spoon of honey works better than over the counter cough suppressants.

Researchers at Penn State University found that buckwheat honey given before bedtime provided better relief of nighttime cough and sleep difficulty in children than dextromethorphan (DM) found in many cough medicines, and without DM’s side effects.

A review of 20 studies with over 2000 patients published in the International Journal of Lower Extremity Wounds concluded that honey treatment of wounds had the the following benefits:

One of the most fascinating reasons posed for honey’s healing effect is an enzyme added by bees that results in the formation of small amounts of hydrogen peroxide, an effective germicide against many bacteria.

Manuka honey of New Zealand and Medihoney, developed in Australia, are most commonly used in treating serious wounds. These honeys also receive special treatment to remove disease causing clostridial spores before use.

Consider using honey for mild wounds and burns, and have a health professional assess and treat serious wounds.

Manuka and Sidr honey may offer real hope for those who suffer with chronic sinusitis. This difficult to treat condition causes headaches, congestion, and difficulty breathing. Sinusitis may be caused by allergy or bacteria or a combination of the two.

Other honeys were included in the study, but were removed when they did not show the same level of bacteria killing effects.

Some claim that eating local honey helps allergies based on the belief that the pollen content in the honey will inoculate them against the allergens. However, few controlled studies have addressed this theory, reports ConsumerLab.com.

Honey, a natural food, has no side effects. It is safe except for infants one year or younger who should never be given honey due to their under-formed intestinal tract and the risk of infant botulism.

Honey benefits for natural healing have been known throughout the ages.

Now scientific studies validate that specific kinds of honey may help treat wounds, coughs, and chronic infections. In some of these studies, honey actually outperformed pharmaceuticals and without their nasty side effects.

Honey is safe except for infants 12 months or younger, so why not try some of these honey benefits?

Molan, P.C., “The Evidence Supporting the Use of Honey as a Wound Dressing,” International Journal of Lower Extremity Wounds, March 1, 2006.