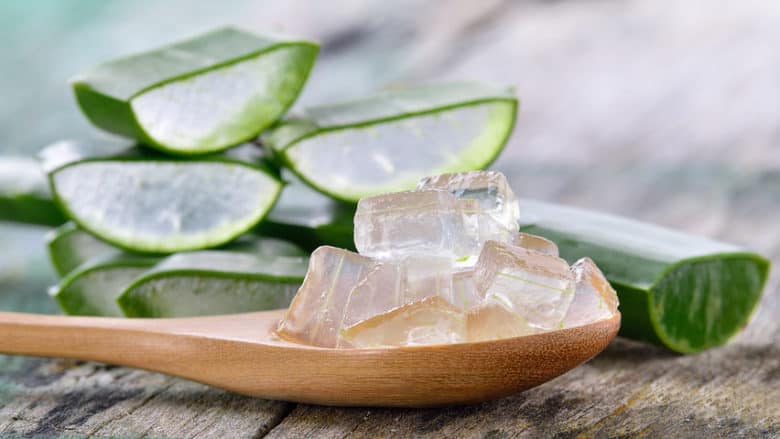 Aloe vera studies try to prove through science what people report from their experience of aloe’s natural healing properties.

Revered as “the plant of immortality,” the early Egyptians placed the aloe plant in the tombs of its Pharaohs.

What Do Aloe Vera Studies Say?

May Help Heal Burns and Abrasions

Aloe vera’s reputation as a treatment of minor burns and abrasions is well-known and accepted. Although, one study showed that aloe gel inhibits healing of deep surgical wounds and it has not been shown to prevent burns from radiation therapy, report National Center for Complementary and Alternative Medicine (NCCAM) experts.

A placebo (fake treatment) controlled study involving 60 men and women with psoriasis found that aloe vera extract cream had cured 25 of 30 patients (83.3%) compared to the placebo cure rate of 2 of 30 (6.6%). The findings of this study suggest that topically applied aloe vera extract 0.5% in a water soluble cream is a safe and alternative treatment to cure patients suffering from psoriasis.

However, not all studies agree. For example, another study found the effect aloe vera gel on psoriasis was modest and not better than placebo.

A study of 44 adults with seborrhea found that aloe vera extract ointment is effective in significantly reducing its symptoms. Seborrhea is a common inflammatory skin condition that occurs on the scalp, face, and/or torso as scaly, flaky, itchy, and red skin.

In a study of of 60 men with active genital herpes, aloe cream (0.5% aloe) applied to their lesions 3 times a day for 5 days shortened healing time to 4.9 days compared to 12 days for those who received placebo treatment.

Further, the study found that it increased the percentage of those fully healed by the end of 2 weeks to 66.7% versus 6%. After followed-up of over 20 months, only 13.6% showed recurrence.

In another study involving 34 women with lichen planus of the vulva (tissue around the vagina), aloe vera gel proved a safe and effective treatment.

Lichen planus, a chronic skin condition characterized by itchy, flat, scaly patches, can occur in various parts of the body.

One study evaluated the effect of one tablespoonful of Aloe vera juice taken by mouth twice a day for at least 2 weeks in patients with diabetes. The researchers reported the following conclusions:

“Blood sugar and triglyceride levels in the treated group fell; cholesterol levels were not affected. The results suggest the potential of aloe vera juice for use as an antidiabetic agent.”
Another study investigated the effects of aloe vera juice in combination with a diabetes drug (glibenclamide) for those with diabetes. They found that taking the drug with Aloe vera juice,
“significantly reduced levels of fasting blood glucose within two weeks and of triglycerides within four weeks. It showed no effect on cholesterol levels and had no toxic effects on kidney or liver function as assessed by blood chemistry. The results support the use of Aloe vera in the treatment of diabetes.”
Although these are promising results, more scientific studies are needed to establish aloe as an effective treatment for diabetes, report ConsumerLab.com experts.

A study of 44 people with ulcerative colitis, investigated the use of oral aloe gel at a dose of 100 ml twice daily for 4 weeks. About half of the people given aloe showed response to treatment; about 30% experienced full remission. Benefits occurred only rarely in the placebo group.

However, the researchers report that further evaluation of the therapeutic potential of aloe vera gel in inflammatory bowel disease is needed.

Aloe juice or aloe latex, a yellow, bitter liquid derived from the skin of the aloe leaf, is a powerful laxative. However, it can cause painful cramping and may not be safe to use in this manner.

Although aloe by mouth is sometimes recommended as an aid in the treatment of asthma. stomach ulcers, and general immune support, ConsumerLab.com experts report, “there is no meaningful evidence that it is effective for any of these purposes.”

Aloe vera studies support that topical aloe gel may help heal burns and abrasions. Though the studies above are promising for other conditions, further research is needed to prove aloe vera’s effectiveness from a scientific perspective.

Aloe vera enjoys a long history of use as a healing herb for many conditions. As the authors of “Aloe Vera: A Short Review,” concluded, “some of them [uses] could be myths and some could be real magic.”

Researchers call for more scientifically designed studies to prove aloe vera benefits beyond its use for minor burns and abrasions.