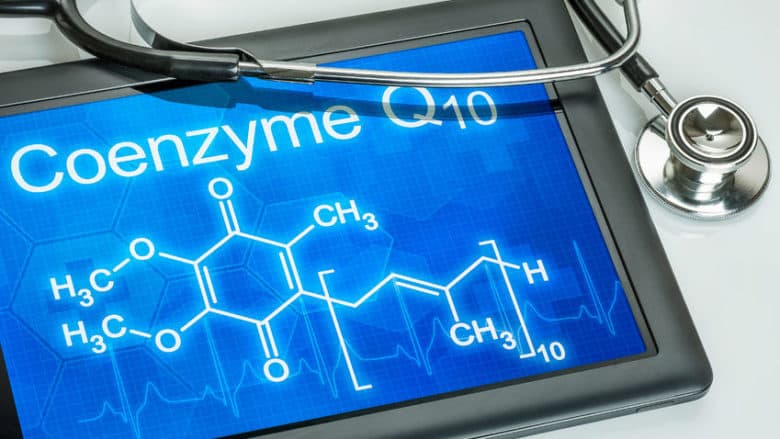 Sally’s mom was failing fast. The doctor had run out of medications to try to help her heart failure. Having read about coenzyme Q10’s benefits for the heart, she started giving it to her mom daily. Sally says:

“I watched my mom’s weakness subside. Her breathing got easier. Later, when we saw the doctor, he was surprised at how well she was doing. I told him I had been giving her CoQ10. He said,
‘You may have saved her life!‘”

Sally’s mom is not alone. Patients taking certain prescription drugs and those with chronic diseases (heart, Parkinson’s, cancer, diabetes, AIDs, and muscular dystrophies) are reported to have low levels of CoQ10, according to a 2010 Mayo Clinic evidence-based monograph. This affects your natural healing system.

What is Coenzyme Q10?

Coenzyme Q10 is a fat-soluble vitamin-like substance present in all of your cells.

It earns its name “coenzyme” as it’s needed for several key enzymatic steps in the production of energy within the cell according to Peter Langsjoen, MD, one of the world’s foremost authorities on CoQ10.

These enzymes are essential for the production of adenosine triphosphate (ATP), upon which all cellular functions depend. It also plays a vital role in the integrity and stability of cell membranes and serves as a potent antioxidant.

“Antioxidants are substances that scavenge free radicals, damaging compounds in the body that alter cell membranes, tamper with DNA, and even cause cell death… Scientists believe free radicals contribute to the aging process, as well as the development of a number of health problems, including heart disease and cancer,”
according to University of Maryland Medical Center experts.

Its term “ubiquinone” describes its ubiquitous (widespread) distribution in the body. All of your body’s cells make CoQ10 (especially liver cells). It is most highly concentrated in the heart, liver, kidney, and pancreas.

What does coenzyme Q10 research say?

Experts at the University of Maryland Medical Center report CoQ10 boosts energy and enhances the immune system. They say that using CoQ10 supplements alone or in combination with other drug therapies and nutritional supplements may help prevent and treat many chronic diseases.

Do you need to take coenzyme Q10 Supplements?

The question of CoQ10 supplementation depends on your needs. Your body naturally makes CoQ10 and you get small amounts from a wide-variety of foods such as organ meats, fish, whole grains, meats, spinach, broccoli, and vegetable oils (particularly soybean, sesame, and rapeseed oils).

Theoretically, if you’re getting adequate amounts from your diet you may not need supplementation. However, keep in mind that your body’s ability to produce CoQ10 decreases with age. Here are some other factors to consider too:

Impairment of your body’s production of CoQ10. The process that your body uses to produce CoQ10 is quite complex. It’s a 17 step process requiring at least seven other vitamins and several trace minerals. This process is by its very nature very vulnerable, reports Dr. Langsjoen.

Excessive CoQ10 utilization by your body. Its role in producing cellular energy for muscles can lead to its depletion with excessive exertion or high metabolic states. For instance, take the most active muscle in the body… your heart.

“When the heart muscle is weakened for whatever reason, it places an increased demand on the nutrients needed by the heart cells in order to create energy. Because of excessive utilization of these nutrients, the heart muscle eventually becomes depleted of CoQ10,” explains Dr. Strand.

Certain drugs can deplete Coenzyme Q10 too. These include:

University of Maryland experts say that people with health conditions like those above may benefit from CoQ10 supplements. The dosage for adults 19 years and older is 30 – 200 mg daily. Since it is fat-soluble it should be taken with a meal containing fat for optimal absorption.

CoQ10 is generally considered safe. Although the MayoClinic.com report says that there is not enough scientific evidence to support its safe use during pregnancy and breast feeding.

Which coenzyme Q10 supplement product should you take?

It can get confusing when it comes to selecting the actual product. There are no requirements for consistency across dietary supplement manufactures. Often company claims cannot be validated.

One example is the claim that ubiquinol is 8 times more absorbable than ubiquinone. The rub lies in the form of ubiquinone used in the comparison.

Ubiquinone comes in powder, tablet, or oil gel forms. The oil gel form of one manufacturer’s ubiquinone is 8 times more absorbable than the powdered or tablet form according to their scientists.

The absorption of well-formulated ubiquinone and ubiquinol are not significantly different at usual dosages (30 to 300 mg). Although these scientists agree that ubiquinol may have some advantages at very high doses.

Dr. Langsjoen sums it up well in his article:

“Since CoQ10 is essential to the optimal function of all cell types, it is not surprising to find a seemingly diverse number of disease states that respond favorably to CoQ10 supplementation…We have only scratched the surface of the biomedical and clinical applications of CoQ10.”

Pay attention to this mighty vitamin-like substance. Based on your age, dietary habits, and health condition, talk with your health provider about coenzyme Q10 supplementation soon!