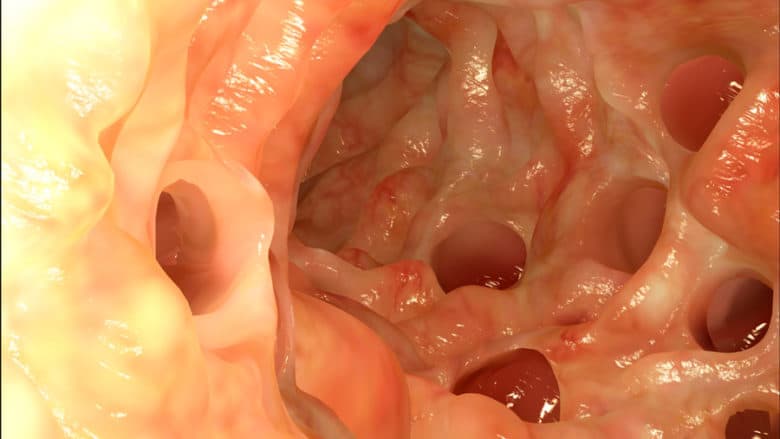 I received the diverticulitis wakeup call in 2004.

One day in April 2004, I was oozing with energy and feeling great. The next day, I woke up with a dull pain in my lower belly. My whole belly felt swollen. I felt weak, fragile and just plain bad. I had a low-grade fever of 100 degrees Fahrenheit.

I tried to work, but realized I needed to see a doctor. After poking on my abdomen, asking a bunch of questions, and reviewing my CT (computerized tomography) scan, she said, “You have diverticulitis. It’s caused by infection of small, bulging pouches in your digestive tract.”

As you age, I learned, your chances of having diverticulosis increase dramatically. Here’s a breakdown:

Diverticulosis earns its name from diverticula, small pouches that bulge outward through weak spots in the lining of the bowel. They occur most frequently in the lower part of the intestine called the colon.

This graphic is courtesy of the National Digestive Disease Clearinghouse.

Most people with diverticulosis don’t know they have it. Symptoms usually don’t occur until one or more of the pouches become inflamed. In medical terminology the suffix or ending part of the word, “itis” means inflammation.

Suspect that you might have diverticulitis if you experience these symptoms. Diverticulitis can lead to serious, even life-threatening complications.

Specific symptoms to be aware of include abdominal pain and tenderness in the lower left side of the abdomen (tenderness on the lower right side may indicate appendicitis). Other symptoms are abdominal cramping, nausea and vomiting, fever, and change in bowel habits

Infection arising in the small pouches (diverticula) is usually associated with diverticulitis. Doctors treat the infection with antibiotics either orally or IV (through the vein) depending on its seriousness. Sometimes infection can lead to formation of an abscess and/or perforation or rupture of the intestinal wall.

An abscess is a collection of puss that causes swelling and harms tissue in the lining of the bowel (intestine). If small and contained in the wall of the bowel, it may clear up after treatment with antibiotics. If antibiotics don’t work the abscess is drained through a minor surgical procedure.

Perforation or rupture of the bowel may occur, leaking puss into the abdominal cavity causing peritonitis, which is the inflammation of the inside of your abdomen (called the peritoneum). Suspect peritonitis, which can (also) be life threatening, if you experience these symptoms: severe abdominal pain and tenderness; and nausea and vomiting.

Peritonitis is an emergency. It requires immediate surgery to clean the abdominal cavity and remove the damaged part of the colon.

A fistula can occur when tissues between two organs such as the colon and bladder stick together because of infection. When they heal a fistula or abnormal opening between the two may form. Treatment involves surgery to remove the damaged tissues and close the fistula.

Intestinal obstruction can happen due to scarring caused by infection. With an obstruction, normal bowel elimination can’t happen. If the obstruction persists, surgery is performed to remove the restriction.

Bleeding may occur related to the bursting of small blood vessels in the diverticula. Often the bleeding stops on its own and requires no further treatment.

If it persists, a colonoscopy is done to identify and stop the site of bleeding. If bleeding is significant or uncontrolled with other measures, surgery is used to remove the affected bowel. If you notice blood in the toilet or your stool, let your doctor know immediately.

How do you get diverticulosis?

Not getting enough fiber in your diet is most likely the main cause of diverticular disease, although this theory hasn’t been proven yet.

Doctors began to notice diverticular disease in the early 1900s, about the same time that food manufacturers started using steel-rolling mills to process flour and other grains. Processed foods soon became the mainstay of diets in most of the industrialized nations.

Diverticular disease is most common in the U.S., England, and Australia. It’s rare in countries that eat more high fiber foods such as nations in Asia and Africa.

Eating processed foods create a much smaller, concentrated, hard stool which causes increased pressure within the colon itself. Over time, this causes weak spots in the lining of the colon’s muscular wall.

A constipated or hard stool causes you to strain when having a bowel movement. Straining causes increased pressure in the colon, which causes the colon lining to bulge out through the weak spots in its wall.

Lack of exercise may also contribute to developing diverticulosis, although the exact mechanism is unknown.

How diverticulitis develops is still uncertain. The most popular theory is that bacteria or stool becomes trapped in the small pouches (diverticula) causing inflammation.

Just as I experienced, an attack of diverticulitis most often happens suddenly and without warning. Diverticulitis can be cured with antibiotics and rest or major or minor surgery if the antibiotics don’t work.

How do you prevent diverticulosis and its complications?

Once you have diverticulosis you have it for life. But you can prevent it, or if you already have it, you can lessen the chance of having complications by making healthy lifestyle changes. Eat more fiber rich foods. Fiber keeps stool soft and lowers pressure inside the colon. Shoot for eating 20 to 35 grams of fiber each day as recommended by the American Dietetic Association.

Foods high in fiber include whole-grain breads and cereals, fruits, vegetables, and beans. You can also take a fiber product such as methylcellulose (Citrucel) or psyllium (Metamucil) or a fiber blend (Fibergy).

My physician advised me not to eat seeds or nuts as they could get trapped in the diverticula causing irritation. However, no scientific data supports this advice. Eating a high-fiber diet is the only requirement highly emphasized in the medical literature.

Drink plenty of water. You need water to replace the fluids that fiber absorbs. Water helps keep stools soft and bowel movements flowing smoothly. Shoot for six to eight glasses a day. Another way to know if you’re getting enough water is to note the color of your urine. If it’s colorless or light yellow, you’re probably getting enough.

Exercise 30 minutes on most days. People used to get enough exercise with their work and daily activities (hanging clothes to dry on the clothesline, sowing crops, caring for livestock, walking into town or to school).

Now with all the modern conveniences it’s important to plan exercise into your daily activities. For example, enjoy a walk before or after work, park further out in the parking lot, and take the stairs instead of the elevator.

Listen to your body. If you feel the urge to go to the bathroom, go. Not having a bowel movement when you have the urge causes harder stools that require more force to pass and increase the pressure within your colon.

My diverticulitis attack was a wake-up call. It cleared up after a week of clear liquids, rest, and antibiotics. But it took me a full month to get my energy back. Since then, I changed my diet adding lots of high fiber foods such as vegetables, whole grain breads, fruits and beans.

However, I had another diverticulitis attack during the Christmas holiday season of 2008 (no doubt eating too many sweets, processed food snacks, mashed potatoes, and turkey). This time I was referred to a surgeon. Fortunately, the inflammation was mild and no surgery was required.

I appreciated the second wake-up call too. It reminded me how important it is to stay on my high fiber diet.

Diverticulosis is a hidden epidemic. Make healthy life style changes now so you can avoid having a diverticulitis wake-up call!