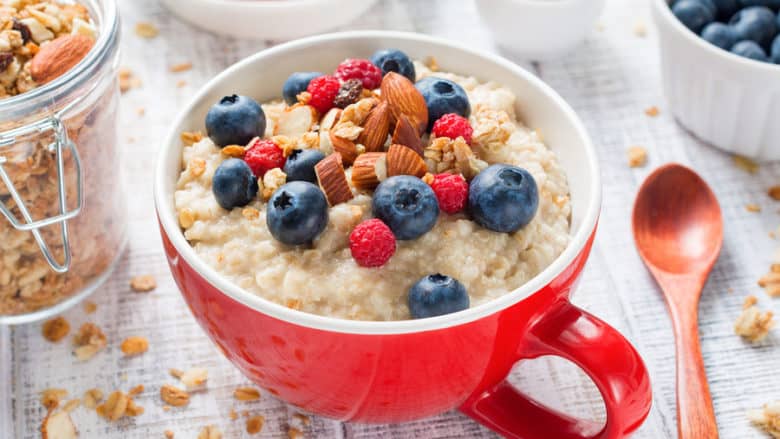 How can a healthy breakfast be so powerful that it affects your whole day and helps you lose pounds too? Let’s start with what happens when you eat an unhealthy breakfast:

Nancy is trying to lose weight so she cuts calories any way she can. Breakfast seemed like a good place to start since she often wakes up late. On a typical morning, she rushes through her activities, then chugs down her coffee with a piece of toast, as she rushes out the door.

At work, she grabs a wakeup coffee drink and begins the fast-paced activities of the day. She starts out “hyper” then her energy drains. She has another coffee. Her energy comes back, but briefly.

By lunchtime, she’s ravenous and in a rush. She eats a bag of potato chips on the run. By afternoon, she has trouble thinking and feels exhausted so she has another cup of coffee, but it’s of no help.

She drags through the rest of the day and by diner time, she’s ravenous again. She eats two servings of everything and ends up going to bed feeling stuffed and bloated and guilty as she ate too much. She weighs herself in the morning and finds she gained a pound.

She skips breakfast and the cycle starts all over again.

Eating a healthy breakfast often doesn’t get the respect it deserves. It’s a darn shame because breakfast is the most important meal of the day.

Breakfast “breaks” the “fast” from the previous day to provide the nutrients your cells need and sets the foundation for your day.

Skipping breakfast has a negative effect on problem solving, memory, attention span, and ability to reason. Although any type of breakfast is better than no breakfast, you can boost its positive effects by the types of foods you choose.

Another fascinating study reported by Ray Strand in shows how eating a low glycemic breakfast can actually help you lose pounds. Two groups of boys ate breakfast with the same number but different types of calories.

To make sure their study results were not due to the characteristics of the boys in the two groups, they switched the meals between them.

How Does Eating a Low Glycemic Breakfast Help You Lose Weight?

Your body runs on glucose created from digesting the foods you eat: the brain needs glucose to think, muscles need it to do work, every cell needs it to function.

In order to protect itself and meet these needs your body is hard-wired to keep your blood sugar in a narrow range: between 70 and 150 mg. Your blood sugar continually fluctuates within this range; rising after you eat then lowering as your cells use up or store the sugar for the energy requirements of the body.

Your body releases the hormone insulin to regulate blood sugar. Insulin causes cells to take up sugar from the blood for immediate use or to be stored as glycogen or fat.

When you eat high glycemic foods or sweetened drinks your blood sugar rises rapidly. This, in turn, triggers a large amount of insulin release to deal with it. This drops the blood sugar often below its normal level. Your body reacts by craving food because it needs it to get your blood sugar back in its normal range.

It’s not a matter of will power, it’s a true biological need that drives you to eat. If you chose high glycemic foods because they’re quick or you’ve become used to eating them, the cycle starts all over again.

Further, when you don’t eat breakfast your body thinks it’s starving. It protects you by hanging on to fat.

Plus, higher insulin levels over time create an environment that not only changes sugar to fat, but holds on to stored fat like a sponge holds on to water, says Strand.

Eating low glycemic foods along with protein normalizes your blood sugar range and insulin release. Your food cravings subside and you end up eating less total calories in the day.

Eating low glycemic foods along with protein normalizes your blood sugar range and insulin release. Your food cravings subside and you end up eating less total calories in the day.

A healthy breakfast sets you up for a healthy, optimum performance day and helps you lose pounds.

Research shows all kinds of positive effects from eating a healthy breakfast, especially if it consists of protein and low glycemic foods.