Is magnetic healing fact or fiction?

No doubt about it — magnetic healing is a FACT. There’s a reason people have used magnets for healing throughout the ages.

Despite western medicine’s skepticism, the use of magnets for healing continues to gain grassroots popularity with the public. This popularity is largely due to users’ claims of pain relief and improved endurance, mental focus, energy, and natural healing. Americans’ spend about $500 million per year on magnets to ease their pain. Worldwide, sales of static magnet devices alone were about $5 billion (£2.6bn, 3.8bn) in 1999.

Now with new research, the tide is turning in favor of magnetic healing in western medicine as well! Even the Mayo Clinic (regarding a form of electromagnetic therapy) says…

“But now, an exciting new era of magnetic therapy is under way.”

What is Magnet Healing?

Magnets are objects that produce a type of energy called magnetic fields. Magnetic fields are an invisible force of attraction that has power… It can do work, it affects its surroundings.

You can see a simple demonstration of their power when using a magnet to hold a note on your refrigerator or to pick up nails or metal shavings.

The image below shows magnetic force lines of a bar magnet created by iron filings on paper. 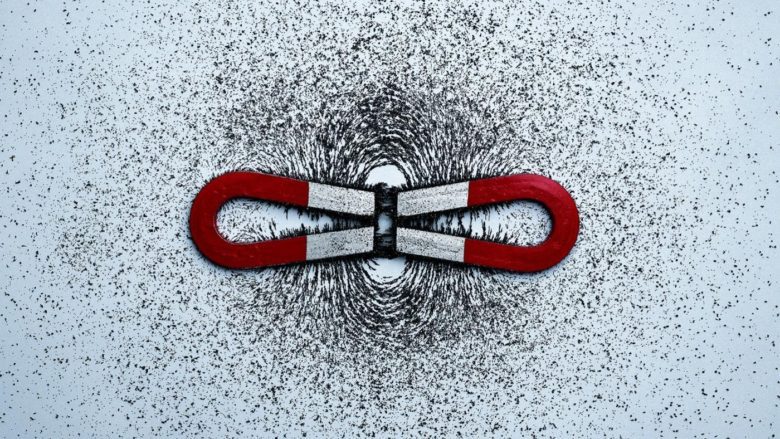 The use of magnets in healing makes intuitive sense since magnetism is a fundamental force in the universe, the earth, and life itself. We are awash in the forces of magnetism… our bodies literally can’t function without it. It’s the movement of positive and negative charged particles called ions that power our cells.

You can see examples of the body’s electromagnetic forces when you look at an EKG (electrocardiogram) or similar tracings of heartbeats on a monitor or brain waves on an EEG (electroencephalogram).

Static magnets form the vast majority of magnets marketed directly to the public. These magnets, made of steel, iron, rare earth elements, or alloys, produce a static (doesn’t vary or permanent) magnetic field. Proponents’ report they relieve pain and improve the functioning of cells.

You place these magnets directly over the skin or inside clothing or other materials in close contact with the skin. They’re offered in a variety of products:

Research in this area shows mixed results with some studies showing pain relief, improved wound healing, and energy levels of participants and others not.

Electromagnetic healing uses magnets consisting of a metal core wrapped with a wire coil. A magnetic field occurs when an electrical current runs through the coil.

In 1979, research showing the effectiveness of electromagnetic therapy for speeding difficult to heal bone fractures prompted the FDA (Food and Drug Administration) to approve it for that use.

The FDA also recently approved transcranial magnetic stimulation (TMS) to treat depression in people who don’t respond to antidepressants. Standard depression treatment, the combination of counseling and antidepressants, works 80-90 percent of the time.

Transcranial magnetic stimulation (TMS) uses brief powerful electromagnetic pulses to alter brain activity. The Mayo Clinic, reports that TMS has a 50 percent improvement rate in relieving depression symptoms and that a total remission of the depression is possible. So far, it has proven to be a safe therapy.

Research is also showing promise for a type of TMS called rTMS (repetitive TMS) for the treatment of chronic pain. This form places the magnetic coils near the painful area of the body versus the head.

Encouraging findings spur researchers to continue studying the use of electromagnets for osteoarthritis, chronic pelvic pain, problems in bones and muscles, fibromyalgia, migraines, neuropathic pain (such as shingles and diabetic neuropathy), and other sources of musculoskeletal pain.

People are attracted to magnetic healing because it works… Although, it doesn’t work all the time or in every situation. But, what therapy does?