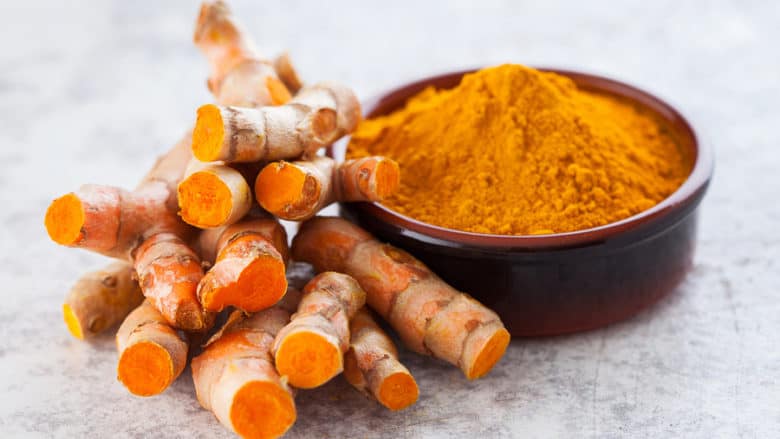 Turmeric benefits make it revered as a “Holy Powder” in India. Its reputation in India is so great that it is a symbol of health and long life and is used in religious and other ceremonies.

Gold-colored turmeric comes from the root of the Curcuma longa plant found in Asia and Africa. Related to ginger, it is widely used as a spice, a food preservative, a dye, and to treat various conditions.

Its use as a spice contributes to the color and taste of curry powders, mustards, and cheeses.

In India and the rest of Asia it has long been used to treat aches and pains, gastrointestinal problems, wounds, sprains, liver, and skin conditions.

For instance, researcher, Ayyalusamy Ramamoorthy (we look at his fascinating research later) shared his personal experience in ScienceDaily:

“As a child in India, he [Ramamoorthy] was given turmeric-laced milk to drink when he had a cold, and he breathed steam infused with turmeric to relieve congestion.”
Turmeric Benefits Studies
Research within the last half century has shown that most of turmeric benefits are due to curcumin, its bioactive agent. Curcumin benefits relate to these actions:

The National Center for Complementary and Alternative Medicine (NCCAM) reports that there is little reliable evidence to support the use of turmeric for any health condition because few clinical trials have been conducted.

NCCAM is working to correct this by funding studies on turmeric’s role in preventing acute respiratory distress syndrome, liver cancer, and post-menopausal osteoporosis.

Here is a sampling of studies showing turmeric benefits for cancer, gastrointestinal conditions, diabetes, and arthritis.

Cancer: Curcumin has anti-inflammatory, antiviral, and antifungal effects found a review of studies published between 2008 and 2011 done by researchers in Israel.

They also found it improved immune and cell functions important for cancer prevention and treatment.

Diabetes: Curcumin’s effect on cells may make it useful in the treatment and prevention of obesity related chronic diseases such as diabetes reports a 2001 study published in the European Journal of Nutrition. Further, study authors say:

“The relatively low cost of curcumin, safety and proven efficacy make it advisable to include curcumin as part of a healthy diet.”
Rheumatoid Arthritis and Other Inflammatory Conditions: A 2011 review of Turmeric benefit studies published in The Journal of Family Practice answers the question, “Does turmeric relieve inflammatory conditions?”

“Yes,” turmeric and its active compound, curcumin are effective for rheumatoid arthritis and other inflammatory conditions, say the authors, though the evidence is limited.

Using technology termed solid-state NMR spectroscopy that can look into the structure of cells, researchers found the mechanism for how turmeric works in natural healing.

This move improves cells’ resistance to infection and malignancy, reports Ramamoorthy in ScienceDaily:

“The [cell] membrane goes from being crazy and floppy to being more disciplined and ordered, so that information flow through it can be controlled.”
How to Get Turmeric Benefits
The best way to get turmeric benefits is by eating it so that you get all of its phytonutrients (plant nutrients). Although, it does have a pungent bitter taste that takes some getting use to. Yet, overtime most who use it grow to love it.

Turmeric, used in curry is a staple of Indian cooking. Use it as a spice with chicken, turkey, salad dressings, salads, soups and especially cruciferous vegetables (cauliflower, broccoli, kale, or Brussels sprouts).

“In one study, scientists discovered that the combination of phenethyl isothiocyanates in cruciferous vegetables and the curcumin in turmeric seems to prevent the growth of prostate cancer tumors in lab animals,” reports James A. Duke in The Green Pharmacy Guide to Healing Foods.
When using turmeric be sure to include plenty of black pepper as it seems to enhance the absorption of curcumin significantly, notes Duke.

However, if you use curcumin as a medicine to treat a condition, its hard to get enough from diet alone. Dr. Duke recommends adding as much to your diet as possible and taking turmeric supplements (standardized to include 90 to 95 percent curcumin).

Turmeric has been used as a healing herb for centuries in traditional Indian medicine for the treatment and prevention of a whole host of conditions. Now Western science shows its benefits as well, though more studies are needed.

To enjoy turmeric benefits make it a regular spice in your dishes and use it with black pepper to increase its absorption.

When using it as a medicine, take its bioactive agent, curcumin as a supplement to make sure you are getting a therapeutic dose.

National Center for Complementary and Alternative Medicine, “Herbs at a glance, Turmeric,” http://nccam.nih.gov/health/turmeric/ataglance.htm.

Schaffer, M; et al., “Curcuma as a functional food in the control of cancer and inflammation,” Current Opinion in Clinical Nutrition and Metabolic Care, 2011 Nov;14(6):588-97.