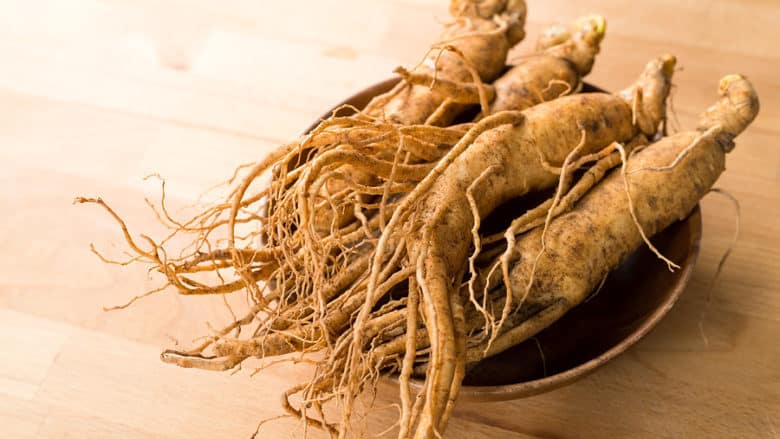 Ginseng benefits prove so plentiful that Chinese medicine considers it a panacea. The term “panacea” originates from the Greek goddess of healing of the same name that translates to All-Heal.

Ginseng, like reishi mushroom acts as a true tonic. The word tonic means to “tone.” Much like a muscle that functions better when toned through exercise, an herbal tonic tones internal organs, and body functions. Tonics are not quick fixes though; they provide their toning effects when taken regularly over time.

I think tonics [like ginseng] work directly on the healing system, increasing, not only defensive capability but also the body’s ability to repair itself, replace damaged structures, and regenerate new structure, reports Andrew Weil, MD in 8 Weeks to Optimal Health.

Ginseng comes from the root of several species of plants. The most common forms used are Panax ginseng or Asian ginseng, and Panax quinquefolius ginseng or American ginseng.

An herb called Siberian ginseng or eleuthero (Eleutherococcus senticosus) is not a true ginseng.

American ginseng, the more popular form, acts as an adapotgen. Adaptogens increase resistance to stress, trauma, and fatigue. Panax Ginseng has more of a stimulant effect.

Ginseng contains biologically active compounds called ginsenosides that work on the pituitary-adrenal axis, and other chemicals called polysaccharides that affect the immune system.

These ginseng benefits, like those of green tea, make it a popular natural healing herb:

MedlinePlus, a service of the National Library of Medicine and National Institutes of Health, reports on research of American Ginseng benefits in treating these conditions:

Although ginseng is generally considered safe, MedlinePlus reports that these side effects may occur especially with higher doses:

Pregnancy and breast-feeding – One of the chemicals in Panax ginseng has been linked to possible birth defects. Not enough is known about the safety of American ginseng during breast-feeding.

Trouble sleeping – High doses have been linked with insomnia.

Schizophrenia – High doses have been linked with sleep problems and agitation in people with schizophrenia.

Surgery – American ginseng might affect blood sugar levels and interfere with blood sugar control during and after surgery. Stop taking it at least 2 weeks before a scheduled surgery.

Warfarin (Coumadin) – American ginseng has been reported to decrease the effectiveness of warfarin.

Medications for depression (MAOIs) – Taking ginseng along with depression medications might cause side effects such as anxiousness, headache, restlessness, and insomnia.

The U.S. FDA recently found pesticides in Root to Health, American Ginseng, Herbal Supplement according to a May 13, 2011 Warning Letter from the FDA to the manufacturer of the product, Hsu’s Ginseng Enterprises, Inc.

ConsumerLab.com has also reported finding pesticides and other problems in some ginseng supplements.

You can find ginseng online at companies that regularly pass ConsumerLab.com testing such as iHerb.

Ginseng benefits prove so plentiful that it earns its reputation as a panacea. It acts as a true tonic, toning and strengthening the body. Yet, scientific research is just beginning to confirm these benefits.

Some people experience side effects when taking ginseng and it may interact with some medications. Avoid contaminated products by buying from manufacturers who use good manufacturing practices.

Ginseng benefits, like ginger and garlic, work best when used on a regular basis to support your natural healing.